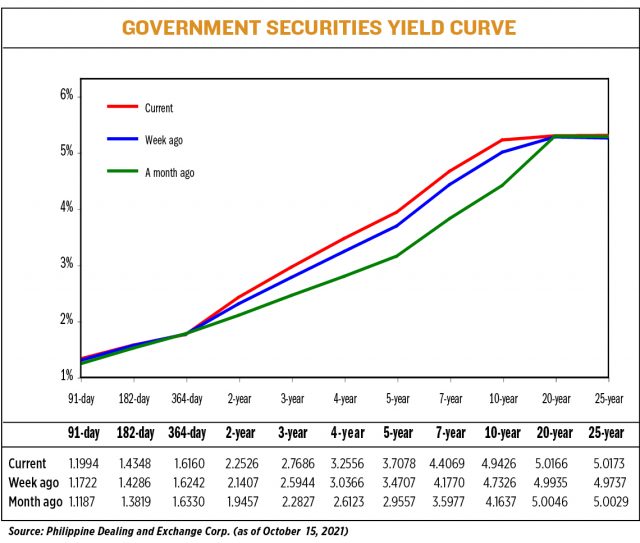 YIELDS at the secondary market climbed last week following the auction of five-year Treasury bonds (T-bonds) and amid near-term inflation concerns, as well as expectations the US central bank would start winding down its asset purchases by next month.

Yields on government securities (GS) rose by 11.58 basis points (bps) on average week on week, based on PHP Bloomberg Valuation Service Reference Rates as of Oct. 15 published on the Philippine Dealing System’s website.

“Inflation and tapering angst continued to take center stage, which caused local yields to rise and for the GS curve to steepen on a week-on-week basis,” a bond trader said in a Viber message.

“Dealers and investors continue to strategically position ahead of [US Federal Reserve] tapering, where short-end bonds were bought while some players were observed selling securities at the far end of the curve to reduce some holdings,” the bond trader added.

“BTr was able to fully award its auction of five-year papers… Market activity remained muted with most investors remaining defensive against sustained pressure higher in rates,” Mr. Liboro said in an e-mail.

The BTr on Tuesday borrowed P35 billion as planned via the reissued five-year T-bonds with a remaining life of four years and five months. Total tenders reached P56.08 billion, higher than the initial offer but lower than the P76.167 billion in bids recorded the last time the government offered the bond series on Sept. 1.

The reissued notes fetched an average rate of 3.576%, climbing by 83 bps from 2.746% recorded in the previous auction of these papers.

Headline inflation was at 4.8% in September, slowing from the 4.9% in August but above the 2.3% print recorded in the same month last year. Year-to-date inflation settled at 4.5%, still above the Bangko Sentral ng Pilipinas’ (BSP) 2-4% target and forecast of 4.4% for this year.

On the other hand, the US central bank last month said it could start reducing its monthly bond purchases as soon as November and signaled interest rate increases may follow more quickly than expected.

The US last week reported weekly jobs claims falling below 300,000 for the first time in 19 months, fueling bets that the Fed will proceed with its planned taper timeline.

“We expect the bearish sentiment to persist over the short term and for rates to continue to edge higher. However, we see value on the 10-year papers at just below the 5% area and expect the yield curve to flatten towards yearend as investors begin to reposition on this part of the yield curve,” ATRAM Trust’s Mr. Liboro said.

For the bond trader: “With global energy prices still elevated, the angst on inflation will still be on players’ thoughts.”

“Adding fuel to the fire is the market trying to time US Fed’s tapering and trying to assess its implications in the local bond market. With that, yield curve is expected to remain steep and continue to monitor US Treasury movements,” the trader added. — A.M.P. Yraola with Reuters