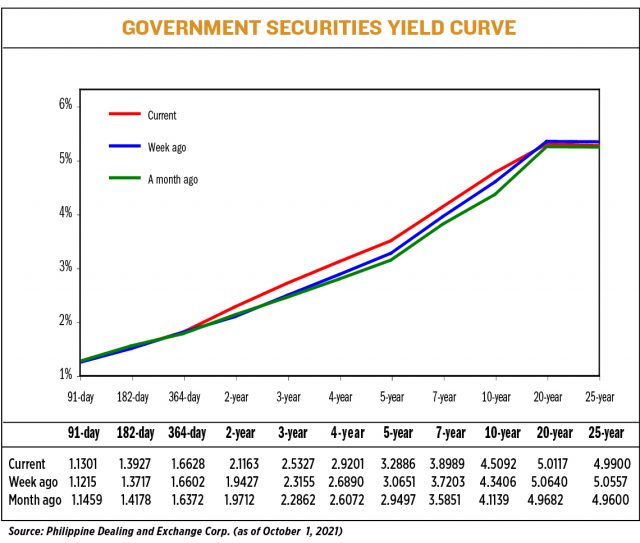 Debt yields, which move opposite to prices, went up by an average of 10.06 basis points (bps) week on week, based on the PHP Bloomberg Valuation (BVAL) Service Reference Rates as of Oct. 1 published on the Philippine Dealing System’s website.

“Local bond yields skyrocketed on a week-on-week basis amid a multitude of catalysts. The reasons for the sell-off were attributed to the surge in US Treasury yields due to the US Federal Reserve’s hawkish tilt and that it may taper its bond buying program soon, then the rally in global oil prices also weighed on sentiment,” a bond trader said in a Viber message.

“[O]nshore, the BSP (Bangko Sentral ng Pilipinas) released its inflation forecast for the month of September and that it could possibly go up to a 5.6%, a level not since mid-2018 if therefore realized,” the bond trader added.

There was a sell-off in US Treasuries last week as the Fed said it could begin winding down its $120-billion monthly bond buying program as early as November. While yields on the benchmark 10-year Treasuries dipped in the latter part of the week, they were still around 20 bps higher compared with levels seen in end-August.

Back home, BSP Governor Benjamin E. Diokno said at an online briefing on Thursday that the consumer price index (CPI) likely quickened to 4.8-5.6%, beyond the central bank’s 2-4% goal for this year.

Meanwhile, the BTr said plans to borrow P200 billion from the local debt market this month, less than the P250-billion plan in September, as well as the actual amount raised that month worth P264.95 billion. For October, the Treasury looks to borrow P60 billion via T-bills and P140 billion from T-bonds during its weekly offerings of government debt.

“Market will look now at BTr’s willingness to award [this] week’s 7-65 reissuance at even higher levels which would likely prompt another round of sell-off for seven-year and longer tenors,” FAMI said, referring to the reissued seven-year bonds on offer on Tuesday.

“Focus will also be on September inflation as cost side pressures mounted pushing inflation well past BSP’s 2-4% target,” it added.

For the bond trader: “[T]he yield curve is expected to maintain its steepening bias ahead of the release of September CPI and as market players continue to monitor developments abroad such as news surrounding the call to raise the debt ceiling in the US and then vigilance as well on Evergrande Group’s developments. The market will also likewise monitor BTr’s seven-year auction and the conclusion of the retail dollar bond (RDB) offering as to its final issue size.”

Finance Secretary Carlos G. Dominguez III said over the weekend that the BTr reported that it closed its two-week offering of five-year and 10-year RDBs on Friday, awarding nearly four times as much as the $400-million target amid strong participation via electronic channels.

BDO Unibank, Inc. Chief Market Strategist Jonathan L. Ravelas said in a Viber message that yields will “continue to move sideways to up in the near term.” — Lourdes O. Pilar