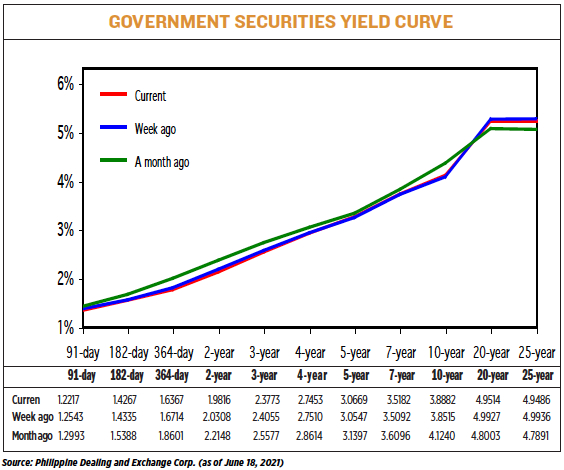 YIELDS ON government securities ended mixed last week as the US Federal Reserve signaled it was no longer guaranteeing its policies would be dovish.

The yields, which move opposite prices, fell by 1.69 basis points (bps) on average from a week earlier, based on the PHP Bloomberg Valuation Service Reference Rates posted on the Philippine Dealing System website.

“The initial catalyst had been the Bureau of the Treasury’s 10-year bond auction,” Jose Miguel B. Liboro, head of fixed income at ATRAM Trust Corp., said in an e-mail. Yields rose further toward the end of the week as hawkish comments from the US Fed caused a spike in US Treasury yields, he added.

The bond market was now more confident that runaway inflation would not occur, said Nicholas Antonio T. Mapa, a senior economist at ING Bank N.V. Manila. “Local bonds were also upbeat, with investors hopeful that inflation would slow in the coming months,” he said in an e-mail.

The Bureau of the Treasury borrowed P35 billion through reissued 10-year T-bonds with a remaining life of nine years and 24 days on Tuesday, amid falling rates and supportive monetary policies here and overseas.

Bids were oversubscribed 2.4 times at P84.24 billion, prompting the bureau to open its P10-billion tap facility amid strong demand.

Mr. Liboro expects yields to continue to move gradually lower. “Notwithstanding the upward pressure on global yields, the main driver locally will be inflation, which has shown signs of plateauing and will be likely to spur additional buying interest on local bonds over the coming months,” he added.

This week, all eyes will be on the Philippine central bank’s policy meeting on June 24.