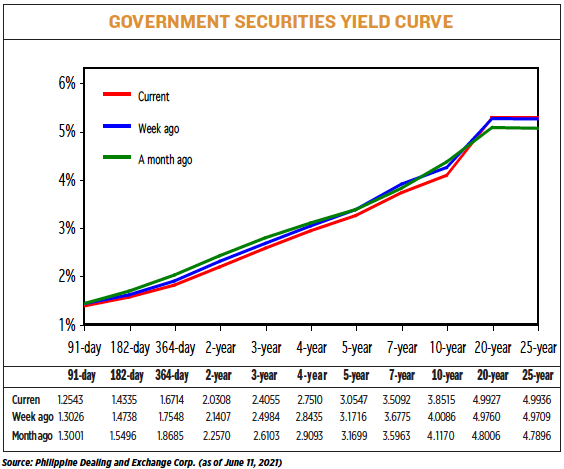 YIELDS ON government securities (GS) at the secondary market went down last week following the release of several key economic reports and the results of the Bureau of the Treasury’s auction of bonds.

GS yields fell by an average of 7.91 basis points (bps) week on week, based on the BVAL Reference Rates published on the Philippine Dealing System’s website as of June 11.

“Local yields declined…on the average as Philippine inflation remained manageable at 4.5% in the past three months which was within market expectations,” a bond trader said in an e-mail.

“Yields likewise declined amid the uptick in Philippine unemployment rate at 8.7%, and due to some market caution ahead of the release of US consumer inflation report for May 2021,” the bond trader added.

Headline inflation was at 4.5% in May, unchanged for the third straight month, the Philippine Statistics Authority (PSA) reported. The figure matched the median estimate in a BusinessWorld poll and likewise fell within the 4%-4.8% estimate given by the Bangko Sentral ng Pilipinas (BSP) for the month.

The year-to-date average of 4.4% settled slightly above the BSP’s 2-4% target, as well as its revised inflation forecast of 3.9% for the year.

Meanwhile, the country’s unemployment rate stood at 8.7% for the month of April, inching up from the 7.1% reported in March, the PSA reported last week.

Economic managers and private sector analysts attributed this uptick to the reimposition of stricter lockdowns in Metro Manila and nearby provinces due to a surge in coronavirus cases.

On the other hand, US consumer prices rose solidly in May, leading to the biggest annual increase in nearly 13 years as a reopening economy boosted demand for travel-related services, while a global semiconductor shortage drove up prices for used motor vehicles, Reuters reported.

The consumer price index (CPI) increased 0.6% last month after surging 0.8% in April, which was the largest gain since June 2009. Food prices rose 0.4%, but gasoline declined for a second straight month. In the 12 months through May, the CPI accelerated 5%. That was the biggest year-on-year increase since August 2008 and followed a 4.2% rise in April.

For his part, Philippine Bank of Communications (PBCom) Senior Trader Justin Robert G. Ladaban attributed last week’s yield movement to strong demand for the Treasury’s offer of reissued seven-year debt, which added to the momentum from the week prior.

“We saw strong interest in the secondary market from market players as the yield curve flattened,” Mr. Ladaban said in a Viber message.

The Treasury raised P35 billion as planned on Tuesday via the reissued seven-year T-bonds, which have a remaining life of six years and 10 months. Tenders reached P83.684 billion or more than twice as much as the initial offer, albeit lower compared with the P90.386 billion in bids recorded when papers were first offered on April 21.

For this week, analysts said the market will watch out for US data for leads, as well as policy meetings of major central banks.

“Domestic bond yields might rise amid likely strong US producer inflation and retail sales reports might fuel hawkish policy views. However, this upward bias might be capped as the US Federal Reserve and Bank of Japan are still expected to keep their monetary policy settings unchanged, while possibly hinting at some tapering of asset purchases,” the bond trader said.

“[W]e’ll see if the momentum continues heading into the 10-year auction… Market players will likely take its cue from there, although we could see some demand still as portfolios look to lengthen their duration,” PBCom’s Mr. Ladaban said.

The Treasury wants to raise P215 billion from the local debt market this month: P75 billion via weekly offers of T-bills and P140 billion from weekly auctions of T-bonds.

It will auction off P15 billion in T-bills on Monday and P35 billion in reissued 10-year bonds on Tuesday. — AMPY with Reuters