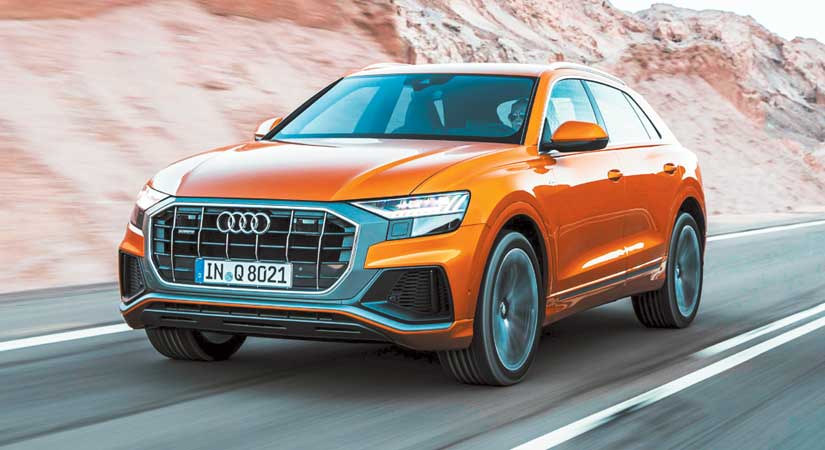 AFTER HAVING scored a Top Safety Pick award in the U.S.A. Insurance Institute for Highway Safety (IIHS), the all-new Audi Q8 now earns for itself a maximum five-star rating in the 2019 European New Car Assessment Program (Euro NCAP).

Audi’s flagship SUV fuses the elegance of a four-door luxury coupe and the versatility of a large SUV. The Q8 has a generously sized interior, a variable luggage compartment, state-of-the-art drive and suspension technologies, and intelligent assistance systems that make it a convincing companion for business and leisure pursuits.

In 3.0 TDSI quattro form, the Q8 is powered by 3.0-liter, direct injection, turbocharged V6 gasoline engine with a mild hybrid system. This powerplant makes 340hp from 5,200rpm to 6,400rpm and 500Nm from 1,370rpm to 4,500rpm. An 8-speed tiptronic transmission sends this output to the all-wheel drive quattro system.

Standard and optional driver assistance features fitted to the Q8 include the Audi pre sense basic, which can help prepare the vehicle for impact by partially closing the side windows and sunroof, as well as by pre-tensioning the front safety belts. Another is the pre sense front, which can help initiate braking if it detects pedestrians and bicyclists, as well as other motor vehicles.

The Q8 scored 35.3 out of 38 points, or a 93% rating, in the Adult Occupant category. The Euro NCAP noted the Q8’s cabin remained stable and that it offered good protection to different sizes of passengers sitting in different positions inside the vehicle. In both the side barrier and pole impact tests, protection of all critical body areas was good, and the car scored maximum points. The standard-fit autonomous emergency braking (AEB) system performed well in low speeds and city driving compared against other vehicles.

In the Child Occupant category, the Q8 scored 43 out of 49 points to get a rating of 87%. Tests showed the vehicle provided good protection to dummies simulating a six-year-old and a 10-year-old child in both frontal offset and side barrier tests, with the Q8 scoring maximum points. One particular feature that keeps children safe in the car is a front passenger air bag that can be disabled. This allows for a rearward-facing child restraint to be used in the front passenger seat.

The Q8 scored 34.5 out of 48 points, or a 71% rating, in the Vulnerable Road Users category. In testing, it was found that the vehicle’s hood provided predominantly good or adequate protection to the head of a struck pedestrian (the performance diminishes only at the edges of the hood). The vehicle’s bumper also provided good or adequate protection to pedestrians’ legs. The Q8’s AEB system performed well too as it avoided or mitigated collisions in most test scenarios.

Tests conducted for the Safety Assist category bared the Q8 recorded a score of 9.5 out of 13 points, or a 73% rating. The result is largely based on the Q8 having a seat belt reminder system for all seats, an AEB system found to perform well in tests determining its response to other vehicles traveling at highway speeds, and a lane support system which helps avoid inadvertent drifting out of lane by warning the driver and applying a gentle steering correction.

In early 2019, the Q8 (when equipped with the optional HD Matrix Design LED lighting package) was named the IIHS 2019 Top Safety Pick. The model earned “good” ratings in all six IIHS crashworthiness evaluations and “superior” ratings for the Front Crash Prevention tests.