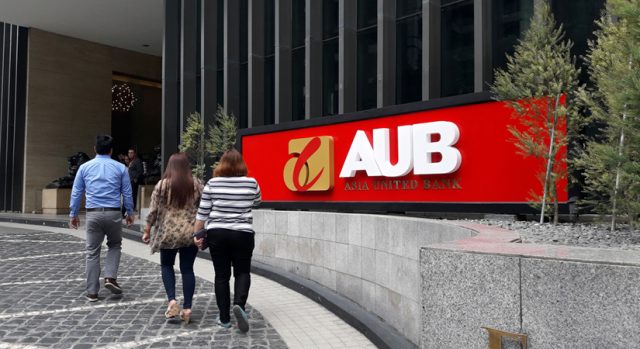 ASIA UNITED BANK Corp. (AUB) saw its net income rose to P1.2 billion in the second quarter as it set aside lower buffers for the expected loan losses.

The bank’s net profit in the second quarter went up by 7.72% to P1.2 billion from P1.114 billion a year ago as loan loss provisions dropped, AUB said in a e-mailed response on Wednesday.

It set aside P896 million in provisions for credit losses from January to June this year, 41% lower than the P1.5 billion it allotted in the same period last year.

But even as it logged a better net income last quarter, AUB’s first semester profit was lower by 17.4% at P1.9 billion versus the P2.3 billion logged in the comparable year-ago period due to lower trading and securities gains, it said in a disclosure to the local bourse on Wednesday.

This translated to a return on equity of 11% and return on assets of 1.2%.

The bank’s net interest income was at P5.4 billion in the first half, inching up from P5.366 billion a year ago, due to weak loan appetite amid sluggish consumer and business activities.

Meanwhile, AUB’s operating expenses went down by 3.6% to P2.7 billion from P2.8 billion.

“Growing customer acceptance of its digital channels also helped trim its operating cost as well as increase efficiency and productivity,” the bank said.

AUB’s 45.1% cost-to-income ratio in the period was lower than the local banking sector’s average of 53.8%, it said in its statement.

On the funding side, the bank booked total deposits of P282 billion last semester, up by 22% from the P230.3 billion seen the year prior due to the rise in its low-cost current account, savings account (CASA) deposits.

CASA deposits made up 71% of the bank’s total deposits during the period, higher than its 68% share last year.

Its total assets as of June also grew by 16% to P336 billion from P289 billion the year prior.

“We expect 2021 to be a better year than 2020 due to the vaccine rollouts by the government and the private sector that will help improve consumer confidence and lead to increased economic activity. However, we remain cautious and vigilant about the COVID-19 variants and the economic impact of the ongoing pandemic. We are not letting our guard down,” AUB President Manuel A. Gomez said in the statement.

The bank had 270 branches across the country as of June, which includes 48 branches of its four subsidiaries. — B.M. Laforga

4 gifts fit for a king