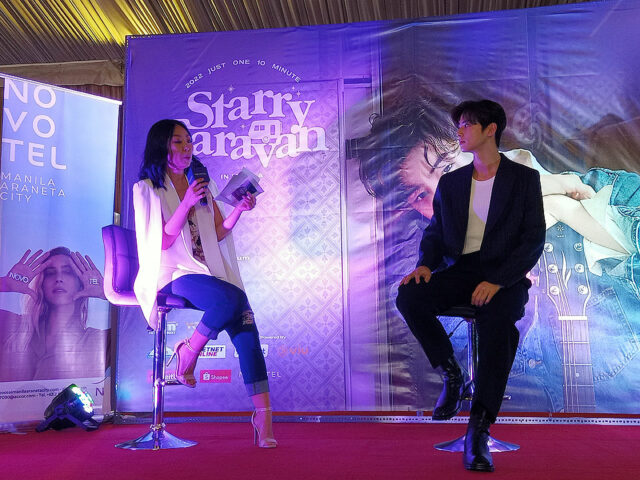 THE VERSAILLES event garden and tent at Novotel Manila in Quezon City on Aug. 6 was packed with fans who quietly waited for their favorite Korean actor to arrive. One fan, a woman in her mid-60s, took five days off from work and flew all the way from Miami to Manila to see her favorite Korean actor.

The object of their attention was K-pop singer and actor Cha Eun Woo, who was in town last weekend for the “2022 Just One 10 Minute: Starry Caravan” fan meet at the Smart Araneta Coliseum that evening. Mr. Cha had last held a fan meeting in the Philippines in 2019.

In January this year, Smart Communications, in partnership with streaming service Viu, held a virtual fan meeting for Mr. Cha through the Smart Hallyu Hangouts where subscribers get to spend an afternoon with their Korean idols online.

When Mr. Cha stepped on stage at the press conference/fan meet, the fans who had been quietly waiting jumped up from their seats and started screaming in excitement.

“I miss you,” Mr. Cha greeted the audience when he came onstage, “How about you?” He was answered by a room full of screaming fans.

He added that he felt excited to be back and appreciated the warm welcome from fans at the airport the evening before.

He went on to answer questions from the audience, sometimes in English, sometimes in Korean which were then translated into English by program host Sam Oh.

He said that despite the numerous projects he has accomplished, “I think I’m the same.”

“What I would like to do is better the things I am doing already, whether that’s singing or acting or all the other things I do. I’d rather get better at those things than move on to something new,” Mr. Cha added in Korean,

Mr. Cha plays a Catholic priest in his next acting project, a K-drama titled Island. The series is slated to premiere in 2023.

The fan meeting later that evening had performances, games, and reenactments of scenes from Mr. Cha’s K-dramas. The evening concluded with a surprise video message from fans, and a performance of the True Beauty theme song, “Love So Fine.”

Mr. Cha’s K-dramas My ID is Gangnam Beauty and True Beauty, and his variety shows, All the Butlers and Handsome Tigers, are available to stream on Viu.  — MAPS