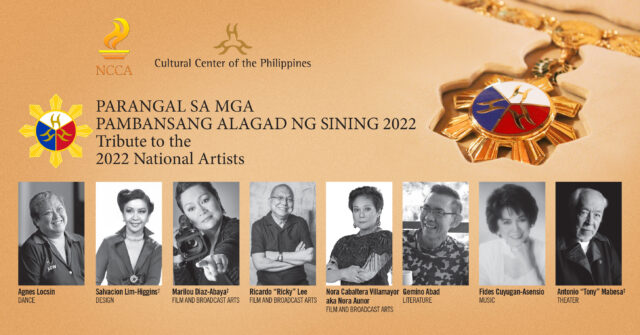 THE EIGHT new National Artists for 2022 were honored with at a tribute ceremony at the Cultural Center of the Philippines on June 29.

The program — hosted by Tanghalang Pilipino actor Marco Viaña and actress Irma Adlawan — featured performances of the new National Artists’ works including Abad’s poem, “Jeepney,” recited by Shamaine Centenera-Buencamino; “Mabini’s Lament,” an excerpt from the ballet La Revolucion Filipina choreographed by Locsin; an excerpt from Mabesa’s Fake; the song “Napakahaba ng ng Gabi” from the opera La Loba Negra, with lyrics by Fides Cuyugan-Asensio and performed by soprano Katrina Saga; a montage of scenes from the films Brutal, Karnal, Moral, and Himala, which were works by Diaz Abaya, Lee, and Aunor; and songs from the Himala The Musical, adapted from one of Aunor’s tour de force, Himala, performed by Aicelle Santos with the Manila Symphony Orchestra.

NATIONAL ARTIST GEMINO ABAD
In his speech, writer, critic, scholar, literary historian, and anthologist Mr. Abad stressed that “any work of art is work of language and imagination.”

“For the artist, language is his muse, and imagination is his guide. Language is not only words. The word is our way, truth, and life,” said Mr. Abad — who has received the Don Carlos Palanca Memorial Awards for his poetry, the CCP Award for Poetry, the Ani ng Dangal Award, and the Gawad Alagad ni Balagtas for lifetime achievement in poetry and literary criticism. “All our words speak true. The nature or being of a word is truth. Only the liar and the author of fake news corrupts language and degrades his own nature.”

NATIONAL ARTIST SALVACION LIM-HIGGINS
Salvacion Lim-Higgins — known for transforming the look of the terno by combining the elements of the Philippine dress with European couture details, and who founded the Slim’s Fashion & Arts School in 1960 — was represented by her son, Mark Higgins, who received the award on her behalf.

He noted how great art is considered timeless.

“Observing her work while I was growing up is what made me realize that fashion is actually both an art and a craft. Art lies in the vision and the craft is in application. The art is the dream, the craft is in making it real,” Mr. Higgins said.

“In creating a garment, she would apply two elements to her process: architecture and sculpture,” he said. “The architecture would surface into the building of the form — the scaffolding, engineering to support this masterpiece. Always thinking in three dimensions, her final touch would be molding and manipulating the fabric onto the human form transforming the wearer into an element human sculpture.”

NATIONAL ARTIST FIDES CUYUGAN-ASENSIO
Professor Emeritus Fides Cuyugan-Asensio’s career in music and musical theater spans over six decades. While performing, teaching, producing, and directing opera and theater productions, she contributed to a Renaissance of classical musical theater in the country. She was the former Chairman of Voice and Music Theater Department at the UP College of Music.

In her video message, Ms. Asensio said that her colleagues in music had made several attempts over 12 years to have her be named National Artist. Three professors in the UP College of Music had worked to turn in materials on her career in music for her nomination.

“Personally, I was not aware of what they were doing or what they had done until suddenly there was a deluge of wishes congratulating me for being National Artist for Music,” Ms. Asensio said. “To God be the glory, thank you,” she said, and ended her message by singing a portion of “Quando M’en Vo” from La Bohème by Giacomo Puccini.

Ms. Locsin recalled sitting in the last row of the CCP’s Main Theater with her friends in her youth. When the lights dimmed, the spotlight would focus on the National Artist in attendance.

“We were young, and it never really occurred to me that I would become one,” Ms. Locsin said in her speech.

NATIONAL ARTIST ANTONIO MABESA
The “Lion of the Theater,” director, actor, and teacher Antonio “Tony” Mabesa founded two well-regarded theater groups: the Dulaang Unibersidad ng Pilipinas (DUP) in 1976, and, a decade later, the UP Playwright’s Theater (UPPT) which focused on new works by Filipino playwrights and the revival of classic Filipino plays.

“Growing up, I was a witness to his love affair with theater. He lived and breathed theater and was the greatest storyteller I know, both onstage and when he was with his family,” Ms. Oca said in her speech.

NATIONAL ARTIST MARILOU DIAZ-ABAYA
Marilou Diaz-Abaya was a film and television director and screenwriter. Her notable films include Brutal (1980), which was the film that established her directorial style and unique feminist voice, Moral (1982) and Karnal (1983).

“Itinuro niya sa amin na ang mga kuwento ay hihilom sa mga sugat ng daigdig. Na bagama’t importanteng masining at maganda ang kuwento at pelikula, wala itong halaga kung wala kang naaantig na kululuwa, wala kang nahihilom na sugat, [at] walang naimumulat sa pag-ibig (She taught us that stories have the ability to heal the wounds of society. While it is important for the story and the film to be beautiful, it is meaningless if it does not move the soul, does not heal wounds, and does not open to love),” he added.

Mr. Lee dedicated his award to his son and grandchildren. He thanked those who nominated him and his workshop students who “continuously teach him how to teach.”

“At higit sa lahat, ito ay para sa mga manunulat na hindi nakalagay ang mga pangalan sa credits, sa mga hindi na-iimbita sa mga film festivals dito man o abroad, sa mga ‘di na bayaran (Most of all, this award is dedicated to the writers whose names are not in the credits, those who are not invited to film festivals here and abroad, and to those who are unpaid)…,” Mr. Lee said.

NATIONAL ARTIST NORA AUNOR
Nora Cabaltera Villamayor, better known as Nora Aunor, has had a career spanning more than four decades in film, television, music, and stage. Her filmography includes 170 films and numerous awards and citations she has received from local and international organizations.

On June 10, 2022, Malacañang Palace announced the eight new National Artists by virtue of Proclamation no. 1390. The recognition is a recommendation of the National Commission for Culture and the Arts and the Cultural Center of the Philippines.

The Order of National Artist or Orden ng Pambansang Alagad ng Sining was established in 1972 “to give appropriate recognition and prestige to Filipinos who have distinguished themselves and made outstanding contributions to Philippine arts and letters.” — Michelle Anne P. Soliman

Fate of the peace process hangs in the balance