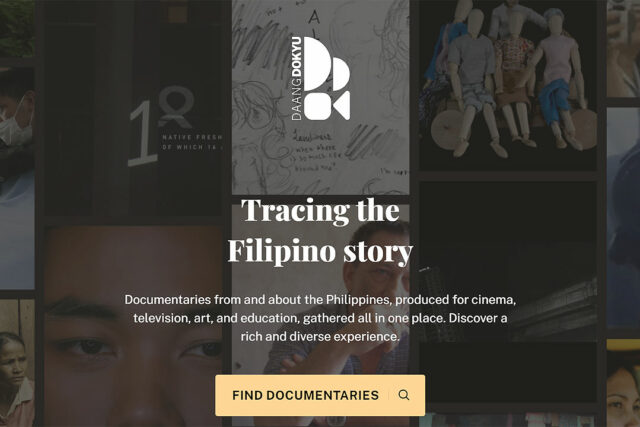 FOR the longest time, documentaries were the little sibling in the film industry, relegated to a single section of a film festival or a single “best documentary” category in film awards that honor every tiny aspect of production of feature films. So, four Filipino documentarians spearheaded a film festival focused specifically on documentaries. That same film festival has now evolved into a website, DaangDokyu.ph — a growing online archive of stories of the Filipino.

Daang Dokyu, or “the docu way,” started in 2020 as an online film festival celebrating the 100 years of film. The idea of a film festival for documentaries actually began in 2018 when filmmakers Jewel Maranan, Baby Ruth Villarama, Kara Magsanoc-Alikpala, and Monster Jimenez were thinking of a way to celebrate the centennial year of Philippine cinema.

The four filmmakers worked with a curatorial team that included former National Commission for Culture and the Arts (NCCA) Cinema Committee Chairperson Teddy Co, and filmmakers Sari Dalena and Adjani Arumpac to selected 45 documentaries out of 300 submitted and solicited works.

What started as a five-week film festival which ran from September to Nov. 2020, has transformed into a website. With the support of the Cultural Center of the Philippines (CCP), DaangDokyu.ph is led by Ms. Maranan as project director.

“We aim to contribute to the ecosystem of truth-based narratives by increasing the accessibility of information and education about Philippine documentaries, elevating the appreciation of documentaries and its practice, and encouraging the development of an audience and distribution network of documentary works,” Ms. Maranan said during the website’s launch on May 4 at the CCP.

WEBSITE FEATURES
DaangDokyu.ph has a database of 1,000 Philippine classic and contemporary documentaries. Each title has a web page containing its information, a trailer, and film stills.

Its homepage features information on the latest uploads such as Lauren Greenfield’s The Kingmaker (2019), Aleia Garcia’s Yanbu (2015), and Carlo Lopez’s Kapag ang Ilog ay Tahimik, Asahan Mo’t Malalim (2019). The oldest documentary with an information page is Dean Worcester’s Native in the Philippines from 1913.

“The website contains a database of documentaries. We acquire them through communicating with filmmakers who gave permission for the films to [on the website],” Ms. Maranan told BusinessWorld, shortly after the launch.

Links to the pages where specific documentaries are currently streaming can be accessed through the website. The titles can only be viewed if a platform is currently hosting a streaming of it.

“The site itself don’t host the streaming but it is a space there the public can see where to find them,” she clarified. “We also don’t want to replace public streaming platforms. The purpose of the site is for education and information, and at the same time to promote the future distribution of the films.”

Screeners are also available for previews upon request from programmers, organizers, and educators.

The website also features a “Submit a Film” tab for filmmakers who wish to include information on their films on the website.

“The filmmakers only have to access the ‘Submit a film’ button. They will be led to a link where they can provide information about their film. They can provide the links to the streaming site. The website will generate a film page for them,” Ms. Maranan said.

“In the future, we might curate thematic collections. It will depend on the public and the cultural institution’s support, so that the website continues to be funded,” Ms. Maranan said. — Michelle Anne P. Soliman

The Rocker and the Prince