Home Arts & Leisure The Beatles: Get Back and the magic of seeing chords become... 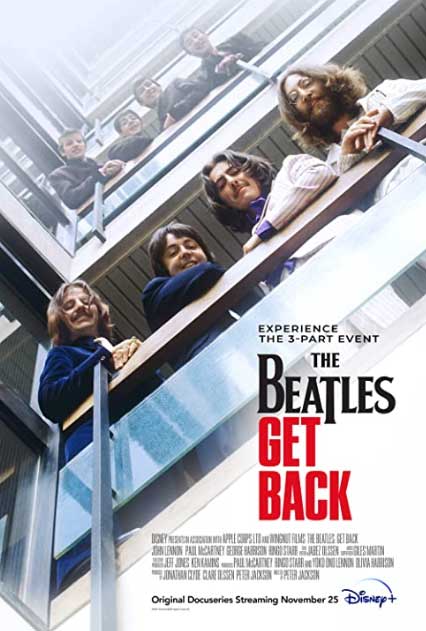 FILMED in Jan. 1969, the documentary Let It Be follows The Beatles rehearsing and recording songs for their 12th studio album of the same name. It also includes footage of the legendary rooftop concert by the group, which would be their last public performance together.

Reaction to the film was lukewarm at the time. The British Film Institue’s Monthly Film Bulletin regarded it as “rather tedious” and the response to the accompanying album fared no better. Writing in the New Musical Express, journalist Alan Smith said the record would stand as a “cheapskate epitaph, a cardboard tombstone, a sad and tatty end” to a glittering and epoch-defining musical career.

But now a new documentary series by director Peter Jackson has re-imagined the film in three lengthy and detailed segments. Thanks to an array of fresh footage, Mr. Jackson’s film sheds new light on this period and the band.

Pre-publicity for the Get Back project emphasized the work that had gone into restoring the original footage.

The kinds of painstaking technical processes that WingNut (Mr. Jackson’s production company) deployed are typical of remastered films and music. These techniques are a key way of marketing the repackaging of old material. With a run-time of eight hours, the huge scope of Get Back is in-keeping with the contemporary penchant for extremely long films, indulgent director’s cuts, and expanded LP box sets featuring multiple versions of songs.

In all these fields, “more” is equated with “best.” However, with Get Back, the initially impressive gloss of the restoration project soon fades as the real fascination lies in the raw and intimate footage of the original project.

We can view Let It Be as a continuation of the fine tradition of cinema verité — documentaries that sought to represent the truth as objectively as possible. With music documentaries, this tradition began with DA Pennebaker’s 1967 Bob Dylan film Don’t Look Back followed by Maysles brothers’ Gimme Shelter and Michael Wadleigh’s Woodstock (both 1970).

In Get Back, the whistle-stop preamble that Mr. Jackson provides, the labeling of every song played (no matter how ephemeral) and the contextual historical information which frames the group for a modern audience are all nice touches. But it is the raw excitement of the original footage that makes the film really soar.

That’s because this version of the story also sheds new light on what was initially remembered as a depressing watch — the Beatles bickering and stuttering their way to a final rupture. As he watched the hours of film footage, Mr. Jackson witnessed a more positive and warmer picture of the group emerging. This is reflected in the previously unseen sequences where the group laugh and lark about and where good humor and encouragement, rather than arguments, shape the mood.

The Let It Be album project (also originally titled Get Back) emerged in early 1969 out of the ashes of the recently released White Album. As writers Roy Carr and Tony Tyler noted, the White Album “indicated the passing of the Beatles as a group… on this LP they act as each other’s session men.”

This idea of the Beatles fading as a coherent unit and writing more as individuals is something I also explore in my own book on the LP. But it would seem that the desire with the original Get Back was to return to a more com-munal way of creating songs, jamming and improvising towards a final version that was unencumbered by recording studio trickery.

The magical evolution of a song from a few chords and snatches of lyrics to a complex arrangement is one of the most fascinating aspects of Get Back. The song “Get Back” itself is a prime example. Developing out of Paul McCartney strum-ming a few chords on his bass, the song’s journey in the film culminates in a triumphant full-blown version in the famous rooftop sequence that closes both films. For Beatles obsessives and less devoted bystanders alike, the chance to eaves-drop on how pop songs are actually made — a normally secretive and mysterious process — is revelatory.

Get Back, while split into three episodes, is eight hours long, which might be daunting for many viewers. While it would have been nice to see this documentary on the big screen, streaming has afforded Mr. Jackson this length. I think this was a deliberate choice by Mr. Jackson to fully immerse the viewer in the slow grind of producing great pop songs.

The famous rooftop concert, viewed from any angle, is truly magnificent, a “shining hour of absolute extreme excitement” as the Beatles own press officer Derek Taylor put it. Publicists tend to exaggerate but in this case the description is spot on, the mundane nature of the performance (especially after all the big talk about concerts in Arabian deserts and ocean liners) demonstrating that often it is the simple things that can mean so much.

The purpose of the album was to allow the Beatles to “get back” to their deep roots as a performing band. As this dream faded it became “let it be” — an expression of resignation and closure. Now, with Mr. Jackson’s version, Get Back means something different again; a return to the original project but also to the Beatles and their legacy, which, well into the 21st century and with the help of this film, still seems firmly assured.

Mark Goodall is a Senior Lecturer on Film and Media, the University of Bradford