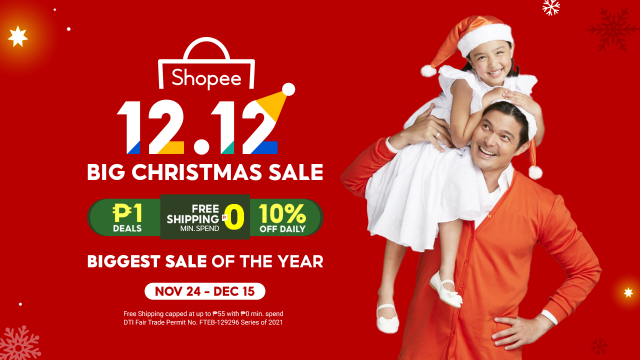 DINGDONG Dantes and Zia, his daughter with actress Marian Rivera, were introduced as Shopee’s Big Christmas sale ambassadors during a press conference last week, with a preview of their commercial which is available on YouTube.  The press conference also saw the awarding of Shopee’s top brands.

This year’s top brand is tech company Vivo for its sales and overall performance. Receiving the award for Best Performing Rookie of the Year was cleaning products company SC Johnson, while Unilever received the Campaign Champion of the Year Award, for participating in 67 campaigns this year, as well as hitting 155% of their sales target.

Martin Yu, Director at Shopee Philippines, noted the billions in sales they made during their 9.9 and 11.11 sales. According to him, 45 million items were sold in the first 99 minutes of the 9.9 (Sept. 9) sale, while earlier this month, on Nov. 11, two billion items were sold across the region on the platform. He also noted that Shopee Mall now has 30,000 brands under its umbrella, reflecting 40% growth in the number of brands in its roster.

“E-commerce in the Philippines saw 132% growth in GMV (gross merchandise value) versus last year, as more Filipinos began to buy and sell online,” he said.

12.12 DEALS
During the 12.12 sale, shoppers can enjoy deals such as free shipping with no minimum spend, ₱1 Deals, and 10% off daily. They can also get up to 90% off on brands like Maybelline, Pampers, Vivo, Oppo, Huawei, Palmolive, Unilever, Adidas, Cetaphil, and Wow Happy.

Shopee will also be launching Shopee Celebrates Local, a contest to promote local sellers. Users can read stories on the local sellers on the #TatakPinoy page and on Shopee’s social media channels, and vote for their favorites until Dec. 5. Winning sellers stand to win prizes they can use for their businesses, while users stand to win Shopee vouchers. Through the Tatak Pinoy page, users can also avail of deals when supporting these sellers.

Finally, Shopee launches the Frontliner Holiday Package. Starting Dec. 10, frontliners can avail of this package, which includes vouchers they can use for their holiday celebrations. — JLG

GrabPay can now be used at SM Cinemas