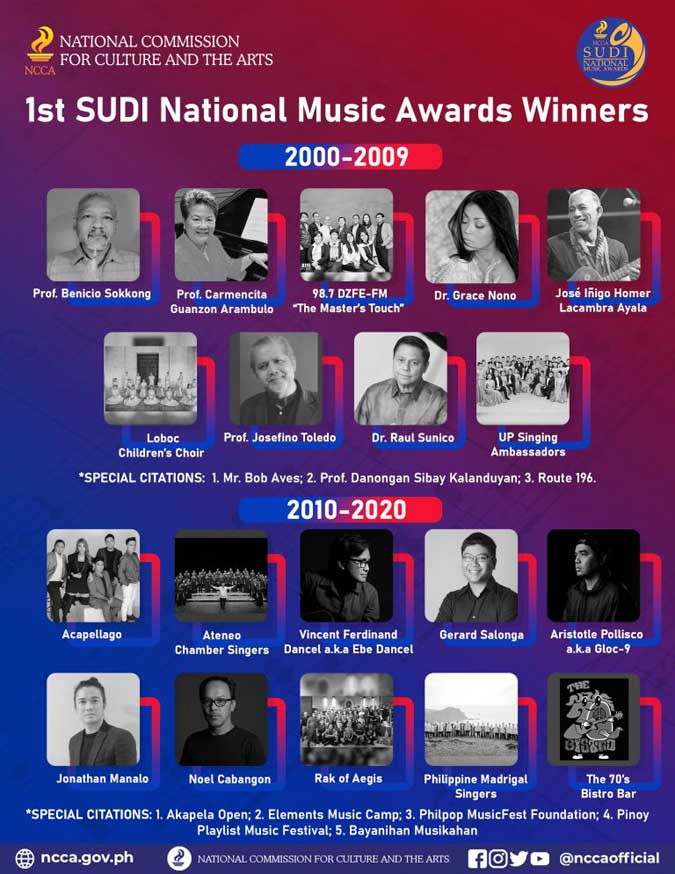 A VERY diverse group of people received the same message via e-mail – that they were among the recipients of an award that honors 19 people and organizations whose work across two decades has enriched the world of Philippine music.

They will be receiving the SUDI Award, a National Music award that aims “to recognize outstanding contributions of Filipino musical works, creators, institutions, and researchers across genres and modes of productions with the highest standard and artistic excellence.”

“We just weren’t sure that it was really for us,” said 98.7 DZFE station manager Tiffany Liong-Gabuya at a During an online press conference on Aug. 2 via Zoom, about receiving the e-mail. “I shared it with my staff, and everybody read it twice before we started jumping up and down.”

“Nagulat ako… hindi ko akalain na  ganito pala kalaki itong award (I was surprised. I did not expect that the award was this prestigious),” Ms. Arambulo said at the same Zoom event.

His reaction upon reading the e-mail was “At last,” said Jonathan Velasco, the conductor and music director of the Ateneo Chamber Singers.

Meanwhile, Mr. Pollisco, who is not used to formal e-mails, had a companion tell him about its contents. “Sanay lang po ako tumingin ng e-mails for files or kapag ka mga related sa kanta (I am used to look through e-mails for files or those related to songs),” he said.

WHAT IS SUDI?
The SUDI Award was launched in 2020 by the National Commission for Culture and the Arts (NCCA) through its Plan/Policy Formulation and Programming Division (P/PFPD)-Arts Section, headed by Ferdinand Isleta.

The award’s name “SUDI” refers to the Ilokano adjective meaning “illustrious, renowned, celebrated, or famous.” The name was proposed by Dr. Felipe M. De Leon, Jr., a member of the SUDI’s technical working group and incumbent head of the NCCA National Committee on Music.

While the original idea was to have one awardee a year, said Mr. Cayabyab, for its launch year, 2020, it was decided that the SUDI Awards would recognize and honor outstanding musical achievements that defined the last 20 years.

The first NCCA SUDI Awards awarding ceremony will be livestreamed via the NCCA’s official Facebook page and YouTube channel in two parts on Aug. 21 and Aug. 28 at 7 p.m.

“These choral groups, they don’t perform for awards, except for competing internationally. But locally, kanta lang kami nang kanta (We just continue singing) … We just spread the good vibes of choral singing everywhere,” Ateneo Chamber Singers’ Mr. Velasco said during the press conference. “So, every time we receive an award, it is so special for us in the choral industry.”

Ms. Arambulo, who has had over 50 years of teaching experience, said she is delighted when she hears of the success of her former students. “Tuloy pa rin ang aking pagtuturo hanggang ngayon (I continue teaching to this day).”

“If we have music luminaries surprised and grateful for the award, how much more for us? We don’t receive music awards. So, I suppose the first thought that came to my head was [that] I’m just so grateful that what we’re doing is seen as a music contribution,” DZFE’s Ms. Gabuya said.

“I’m very honored. Na-prove ko sa sarili ko na… hindi mo kailangang sumakay sa alon ng iba. Pwede ka gumawa ng sarili mong alon para maramdaman ka ng ibang tao (I proved to myself that you do not have to ride the wave of others. You can create your own wave to be felt by others),” said Gloc-9.

In succeeding years, excellence and significant musical contributions shall be recognized triennially. — MAPS