Home Arts & Leisure Streets to be made for walking 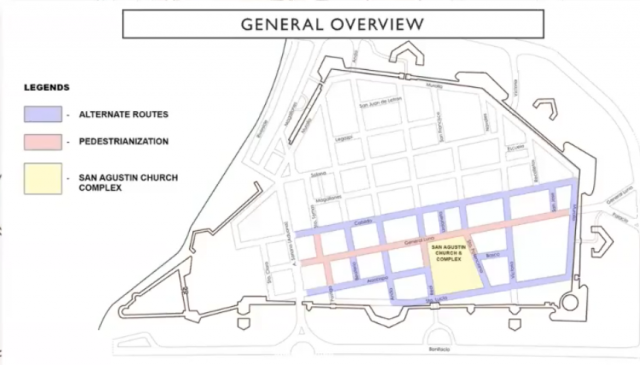 WALKING in the streets of historical sites is a more immersive experience than riding through them in a vehicle. With this in mind, the Intramuros Administration (IA) is initiating for the pedestrianization of General Luna St. As part of an over-arching plan to improve mobility in the walled district of Manila.

General Luna Street was chosen as it passes by most of the historical sites in the district such the Manila Cathedral, San Agustin Church, and the Casa Manila complex.

“General Luna is one of the busiest thoroughfares alongside Aduana St. and Muralla St.” said Vhincent Cañares from the Urban Planning & Community Development Division of Intramuros during a Zoom and Facebook live dis-cussion on July 12. “Other than [the fact that] General Luna (Street) was identified by the World Bank [study], given its length and location, the current administration has already conceptualized for its pedestrianization with as-sessment on affected shareholders, the community in the barangay,” Mr. Cañares said.

In 2017, the IA made strategic plans for the district including a Traffic Mobility Plan (TMP) which was made using recommendations based on assessments from the 2014 World Bank Study on Improving Mobility in Intramuros. The TMP is done in coordination with the area’s stakeholders, communities, barangays.

The TMP has four phases. The first, most of which has already been implemented, involves interventions such as designating one-way streets, removal of street parking in designated streets, and sidewalk widening. Phase 2 fo-cuses on provisions for measures in support of those in Phase One such as making General Luna one-way.

The IA is now looking into Phase 3 which focuses on measures that can be implemented in two years, while Phase 4 focuses on its long-term vision of walking as the main mode of mobility in Intramuros.

As it is, “58% of the people whose trips ends inside the walls enter on foot,” according to the World Bank study. “However, this number largely reflects that fact that most transit routes terminate outside the walls and that stu-dents are the largest user group,” it explains.

The study noted that pedestrianizing General Luna St. “provides an unobstructed route linking the important attractions inside Intramuros to the attractions in Rizal Park.”

The IA is proposing to fully pedestrianize General Luna St. as a pilot site to see how this improves mobility within Intramuros.

Mr. Cañares clarified, however, that the IA does “not want to implement a full walking city for Intramuros.” The project includes proposed alternate routes along the streets of Cabildo, Arzobispo, and Sta. Lucia for vehicles.

“The TMP is currently being reviewed and considered for revision by IA considering that we are now looking forward to the pedestrianization of General Luna and the soon to open Binondo-Intramuros Bridge,” Mr. Cañares said.

Intramuros Administrator Guiller B. Asido said that they have communicated their concerns to the Department of Public Works and Highways (DPWH) regarding the opening of the Binondo-Intramuros Bridge which is targeted for completion by the end of 2021.

“The basis of our position is that there should be no trucks using the bridge, and we were assured that as well. And that there will also be a pedestrian and bike lane in the bridge,” Mr. Asido said, adding that the IA inspected the bridge this month.

Mr. Asido also said that a discussion with the Intramuros Tourism Council has been conducted, with suggestions to adapt a sticker system and time scheduling for entry of heavy vehicles.

In a joint project with Makati Business Club (MBC) and Konrad Adenauer Stiftung (KAS), the Intramuros Administration is asking residents and visitors their thoughts about the pedestrianization of General Luna through a Polis sur-vey (https://pol.is/2yyrtwkpxt). Their answers can provide insights that will inform the IA’s approach to the initiative. The survey is ongoing until July 28.

“I think that in the long term, the reason we are doing this is always a response to ensure we are committed to the mandate of the Intramuros Administration which is the orderly restoration and development of the district,” Mr. Asido said.

“Conservation… should be geared as well towards the quality of life of the people who are actually living, staying, and doing business in the district. And also, to ensure that the identity of the district and Filipinos will be properly respected [as well],” he said. — Michelle Anne P. Soliman