Home Arts & Leisure Who are the supernatural creatures today? 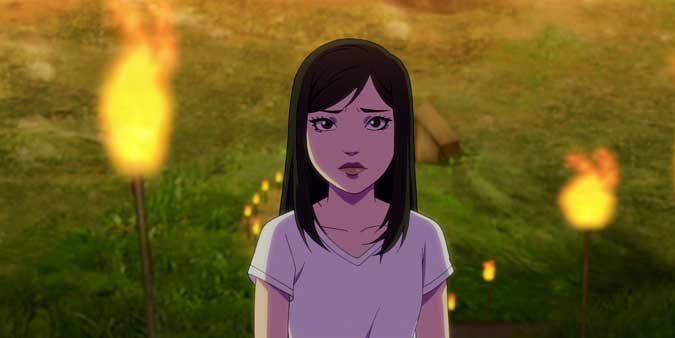 AFTER days of hyping up the Trese animated series’ Netflix premiere through viral videos which purport to show vandalism of billboards and street advertising by creatures of the night, the story of young detective Alexandra Trese and her clash with denizens of Philippine mythology is being released today.

The black and white, English language Philippine graphic novel created by writer Budjette Tan and artist Kajo Baldisimo has been adapted as a Netflix Original Animé series. This writer was able to watch the series’ six episodes (with a running time of approximately three hours) through Netflix’s media preview access.

The first episode was an exciting introduction to what the viewers are in for as it features the mystery on the white lady of Balete Drive and the aswang clan. Aside from the enigmatic tone of the story, the characters of the nuno (dwarf), and Crispin and Basilio, Alexandra’s adopted twin brothers and partners in crime, provide some comic relief.

The episodes begin with a prologue scene that cuts to the show’s introduction accompanied by eerie music and faint chants, and red, black, and white graphics with illustrations of the characters and crime scenes in Manila. Then, it proceeds to the story itself.

While the first two were enjoyable, it was not until the third episode’s last scene that I was hooked enough to click “Next Episode” without a break. But I just did not want to watch the full series in one go, so I resumed watching the second half of the series on another day. During my break from watching, I continued thinking of how the story elements would eventually tie together.

Filipino actress Liza Soberano performed well as the voice of Alexandra Trese in the Filipino language version. Her deep voice fits with the lead character’s serious persona and was unrecognizable from her normal higher pitched speaking voice. I preferred and enjoyed watching all episodes in Filipino (it just hits differently in your native language). Non-Filipino speakers have the option of choosing English, Spanish, and Japanese audio, while subtitles are available in English, Filipino, Spanish, and traditional Chinese.

The animated series captures the landscape of Manila in detail. I recognized the city streets, public transportation, landmark buildings, and the heritage house aesthetic. It also includes the details of narrow roads, cable wires, and billboards on building rooftops.

Having read a few of the Trese comics as a college student, watching it as an animated series was a different experience. Trese now made me think of the creatures and monsters in the story as metaphors for people in our society today. It is a different experience from watching old Filipino series with mythical creatures as a kid and learning about them through Filipino literature in school since it was mostly entertainment to me at that time.

Trese is the first Philippine Netflix original animated series, as diverse Filipino stories gain a global platform. After many stories of witches, wizards, elves, orcs, vampires, and werewolves, it is exciting to introduce Philippine folklore and its creatures to a wider audience.

The six episodes were able to establish how Alexandra Trese becomes the detective that she is, and why and how the elements in folklore merge with present day. I recommend Pinoy viewers see the show, and — who knows? —  there may be more creatures to explore.

Stay tuned during the last episode for a teasing, eerie post-credit scene.

Thousands of Japan homes without power after quake kills four