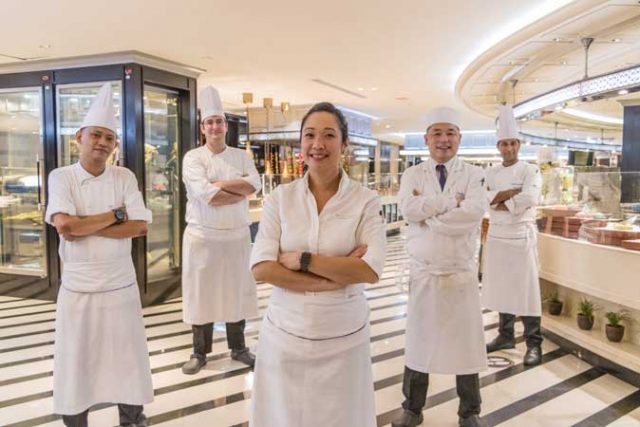 Just as Hidilyn Diaz and Nesthy Petecio brought pride to the nation as champion Olympians, another Filipina, Bettina Arguelles, brought the country distinction by being named the first female Southeast Asian Executive Chef of the Sofitel Hotel Group. As many of us know, Sofitel is part of the Paris based Accor Group, one of the largest hospitality conglomerates in the world with 5,100 hotels in 110 countries. Sofitel is among Accor’s luxury brands and a purveyor of French art, culture, and cuisine.

Many of us may not understand the significance of being an Executive Chef for a global luxury hotel brand. It is a highly competitive field dominated by Anglo Saxon (white European) men. Executive Chefs are responsible for directing the culinary activities of the hotel, which is customarily the second largest source of revenues, after room sales. Food & Beverage operations (F&B) are often the largest contributor to bottom-line profits.

Under the Executive Chef’s purview is the task of conceptualizing food items for all the F&B outlets of the hotel (from casual dining to themed cuisine — from banquets to fine dining); ensuring the highest level of quality across all F&B products; managing costs; and orchestrating an army of sous chefs, pastry chefs, bartenders, kitchen assistants, etc.

Bettina broke the stereotype of an Executive Chef in a French hotel chain. Not only is she the first and only female Southeast Asian, she also began her culinary training late in life, when she was 30. Most chefs start their training in their teens.

Bettina is a product of the Ateneo where she graduated from Communications Arts. She worked in the advertising industry for most of her 20s. But food was her passion and being in the kitchen was her calling. At 30, she enrolled at the At-Sunrice Global Chef Academy in Singapore. She paid her dues by working for the Fullerton Hotel, Resorts World Sentosa, Privé (a restaurant owned by Michelin-starred chef Wayne Nish), Bistro Moderne (owned by world-renowned chef Daniel Boulud), the InterContinental Singapore, and the Sofitel Group. She picked up a number of culinary awards along the way, including the Malaysian Culinaire in 2007 and the Philippine Culinary Cup in 2015. Two years ago, she was named Chef of the Year by the globally acclaimed World Gourmet Awards.

I met Bettina at the Sofitel Manila where she oversees the hotel’s F&B operations, including the famous Spiral restaurant. We were introduced by Sofitel Manila’s new General Manager, Oliver Larcher. Sofitel is one of the few hotels that is doing well despite the pandemic. Larcher has been successful in keeping costs down and keeping operations tight whilst maintaining the highest standards of quality Sofitel is known for. The hotel is buzzling and in fighting form, save for mandatory social distancing restrictions.

I asked Bettina what she offers, as an Executive Chef, that white male chefs do not. She said, “among the advantages of being a Filipino is that we are used to adversities. We know how to adapt to difficult situations with creativity and an indomitable spirit. Filipino workers are very much sought after overseas because when we’re thrown in the water, we swim like there’s no tomorrow. The Filipinos that leave the country are driven out of our comfort zones.” It’s a sink or swim situation where those who survive tend to thrive and become the best they can be.

Her personal management style is markedly different from the Europeans. Whereas most Executive Chefs maintain an attitude of superiority and manage with fear (it has become common since Gordon Ramsey), Bettina has chosen to be a “servant leader,” she professed.

“Anyone who reaches an Executive Chef position is assumed to be proficient in cooking. That is a given. But what makes me unique is that instead of perpetuating an atmosphere of fear and oppression, I choose to be nurturing and maternal. This probably stems from the fact that when I ventured into this industry, I was already a mother of two, hence, the maternal instincts were a very strong part of my character. I have found that inspiration and motivation is a more powerful than fear or reprimand.”

Unlike other Executive Chefs, Bettina has no qualms about getting her hands dirty in the kitchen. Her staff (especially the non-Filipinos) are often surprised to see her chiffonade herbs, cut fruits, or cook eggs at the omelet station. It is unheard of for Executive Chefs to do such “menial tasks.” But Bettina is as strong believer in servant leadership. “I want to change the perception that certain chores are too menial for an Executive Chef. I don’t like my team thinking that once they reach a certain position, they are too good to peel potatoes or cut onions. In fact, it is the opposite. No task is unimportant, no task is too small. If we put as much attention and importance in every step of the cooking process, the end result will always reflect perfection.”

She attests that her servant attitude has made her team work harder and do better. Working side by side with her staff also gives her the opportunity to mentor her underlings. Her management style is indeed maternal and this is perhaps why she was singled-out by the Sofitel management as a worthy Executive Chef.

Many of our youth are aspiring chefs and hope to become Executive Chefs one day. To them, Bettina offers this advice: “Go out and see the world. Work in a foreign country, travel to eat, read cookbooks like you would read a novel, and always think you’re a beginner that needs to prove yourself.”

Bettina is classically trained in the French style and her menu is a reflection of that — sophisticated, well-considered, and technical. However, she also makes it a point to promote Filipino cuisine whenever possible. However, she says “we need to elevate our cuisine by using great ingredients, improving our presentation, and highlighting regional cuisines. The world needs to know more than just lechon and adobo (whole roast pig and meat stewed in vinegar). There’s so much more to our cuisine than that.”

Remember the name — Bettina Arguelles. She brings pride to the country at a time our people are weary of COVID-19 and all its negative outcomes. She reminds us that Filipinos can be great simply by sticking to their values and honing their craft to world class standards.

Bettina Arguelles will go down in history as an icon of Philippine culinary arts along with other Filipinas like Nora Daza, Glenda Barretto, Gaita Fores, and Cristeta Comerford.

Challenges ahead for local football but stakeholders hopeful