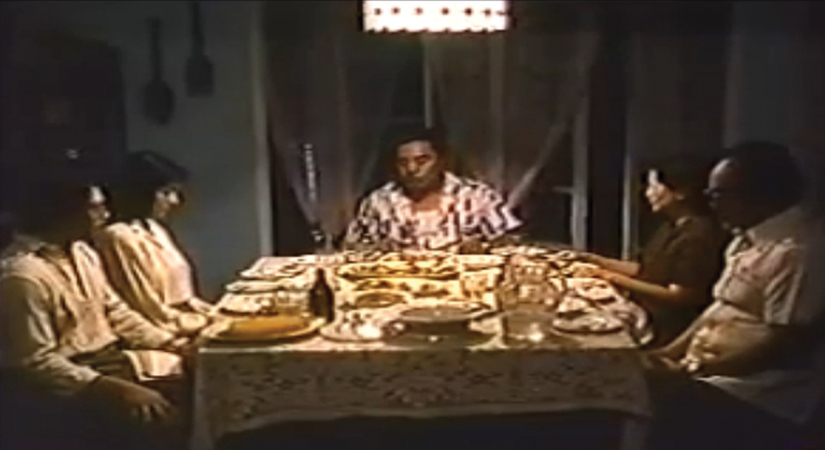 (This and other Filipino films are available on iWant, HOOQ, Cinema One YouTube Channel)

Kisapmata (Blink) starts off quietly enough, with Mila Carandang (Charo Santos) informing her parents Mang Dadong (Vic Silayan) and Adelina (Charito Solis) that she’s getting married to Noel (Jay Ilagan). Harmless enough scene — only why does Mila look like she’s about to set off a hand grenade and why does Adelina pad quietly to the kitchen to fetch an ice pack for Dadong’s sudden migraine, flattening her body against the wall when passing his chair?

Little details like that don’t just embellish Mike De Leon’s film but define it, set a tone that De Leon sustains throughout, that of a horror comedy.

A horror comedy? But let me explain.

The opening premise is common enough: the beautiful daughter prematurely pregnant; the fuming father, the hapless suitor, the mother standing serenely on the sidelines. Mila marries Noel and Dadong bullies his way between the married couple, going so far as to use his wife Adelina to finagle a major concession — that Mila cancel her hotel honeymoon to attend to her mother’s latest in an endless series of headaches.

As the film progresses — and really you must watch with a Filipino audience to truly appreciate this — the viewers respond to certain scenes and details with a bark halfway between embarrassed horror and recognition. I say “horror” deliberately; certain members cringe, or sink into their seats, or sit bolt upright, having remembered a mother or father like that or — worse — having committed similar social sins themselves. And observing these reactions you’re certain you’ve uncovered something about their family lives, possibly far more than they themselves are willing to admit.

De Leon adds details here, there: the barbed wire-like thorns crowning the iron gate; the crossbar dropped across the grilled front door. The way Adelina, Mila, and Onyang (Aida Carmona) seem to tiptoe around Dadong as if afraid to wake him from his vexed indolence. The house itself is an open plan, split-level suburban-style structure with high-ceilinged central space observed by a balcony; on one end of the balcony is Dadong’s bedroom, on the other is Mila’s. Tellingly the stairway angles down from Dadong’s end; the house’s single phone sits on a little side table directly underneath. Nothing said or commented upon but you know seeing this that Dadong has a vantage over the entire layout; you also know or sense that he has feelers throughout the house, tripwire threads held by a patient waiting spider.

Horror and comedy aren’t mutually exclusive; a filmmaker as recent as Jordan Peele has stated that both depend on timing to shock or amuse; a filmmaker as far back as James Whale knows how easily the horrifying can become ridiculous, how easily the ridiculous can become horrifying. What’s so ridiculous about the Carandangs is that their predicament is almost contemptuously familiar; what’s horrifying is how far De Leon pushes this predicament to its extreme yet logical conclusion.

It helps that De Leon above all Filipino filmmakers is brisk with his editing. Most Filipino films are carelessly cut, I submit; even one of our finest, Lino Brocka, prefers to linger over his more emotional scenes to catch every teardrop. De Leon betrays no sense of sentimentality over footage; his films are cut ruthlessly, restlessly, containing little narrative fat.

Take the “pamamanhikan” scene, where the parents of the couple meet over dinner. De Leon has the fathers talking, negotiating the conditions of the wedding, occasionally cutting away from their conversation to Mila’s and Noel’s often dismayed reactions. When Dadong mentions the P10,000 dowry De Leon shifts to closeups, the camera cutting from one face to another, sometimes moving from one face to another to capture the dawning realization between Noel and his father (and the now thoroughly shamed Mila) at what the man is asking.

It isn’t all brief shots and sudden cuts of course; De Leon bookmarks both ends of the scene with Dadong sucking on his bottle of cerveza (San Miguel of course), at opening as a bluff and show of strength, at close as a gesture of triumph. “I didn’t want this you know,” he says, in part sarcastically, having gotten exactly what he wanted, in part honestly, as he really is trying to make the best of a bad situation.

De Leon marshals all aspects — from performance to cinematography to script to sound to music to (as noted) production design — together to dance his choreography. Like Dadong, like the aforementioned spider, he lays out a web of which he holds the threads, tugging and pulling us this way and that till the entire scheme is laid out before us; by then of course it’s too late.

But De Leon isn’t just all technical prowess and probing intelligence (though those qualities do go a long way); in his best work, and above all in this work, there’s a hint of the personal. The house is comfortably spacious if not luxurious, but the film spends most of its time inside and you eventually feel the confinement, the claustrophobia, the sense (as Noel puts it) of the place as a “military camp” complete with curfew and strictly regulated access and egress. If, as Sartre puts it, hell is other people, then family is a particular circle of hell for De Leon.

Then there’s Dadong, who sits at this film’s heart of darkness. Dadong is no fool; he knows the ways of the world only too well and has parlayed his knowledge for a house, a jeep for transport, and enough money to sustain him and his family. His most obvious flaw is that he knows the world too well, accepts it as it is, doesn’t consider the possibility of better — that this is the world in which he lives, and he will enjoy it as much as he can, in any way he can.

I’ve seen a few of Vic Silayan’s other performances, mostly in Lamberto Avellana’s 1950s films — he’s a versatile character actor, often able to switch from villainous to sympathetic, but he’s also an open straightforward actor (except maybe in Anak Dalita where his role as community priest has ambiguous undertones). Silayan is unrecognizable here: what De Leon has apparently done is wall up this charismatic actor’s usual likability, shut him down and sealed him like a basement boiler, gathering pressure with every passing minute. You see it even in Dadong’s most garrulous moments — when he first receives Noel to his house he shows the prospective groom his worm farm, even taunting the youth to touch one (“Afraid?” he teases). You sense the performative aspect of the scene, how Dadong uses his brassy volume and physical presence to intimidate. It’s a show, and a bluntly effective one; the real Dadong sits behind this bluster and watches, calculating the effect on his prospective prey.

The secretiveness and manipulation I suspect is an aspect of De Leon himself. The famously reserved filmmaker is known to get inside his actors’ heads, drawing out psychologically keen performances. In this instance we get to know Dadong, not so much from what the man himself lets slip (his long speeches feel more like parodies of macho bragging and received social pieties than anything he actually believes in) than from what others say or feel discussing him behind his back. We know little in terms of actual facts; what we sense, however, is a whole other far darker thing, and the vagueness is unsettling.

Then there’s the cruelty. Dadong is perfectly capable of walking past Noel, ignoring his morning greeting completely; he’s also capable of the indirect message, ignoring a doorbell or hanging up a phone. When Dadong does actually lash out, it’s sudden and unpredictable; the worst part that De Leon suggests he’s capable of more.

De Leon is hardly ever explicit, least of all in this film, which allows us to speculate on what, exactly, does Dadong represent. The repressive rapacious Marcos regime, of course (remember Dadong is a retired officer of that regime’s police force); the patriarchal nature of the Filipino family. The film’s true horror however lies in the fact that Dadong speaks to us from the conservative center of Philippine society, that much of what he says and does and believes in is based on principles held by many Filipinos, only slightly tweaked to reflect De Leon’s own personal nature, if not actual beliefs.

And more: in one scene Mila and Noel decide to confront Dadong once and for all, to negotiate a peace. They kneel before a statue of Christ and the camera zooms slowly in on the statue’s impassive face, as if seeking a response from our lord and savior only to dissolve into an image of Dadong staring impassively back, the camera zooming just as steadily out, suggesting — what? That Mila and Noel are praying to an impotent unresponsive god? That the god they’re really pleading to for release and relief is Dadong? The implications of the shot are cruel, as cruel as anything Dadong has done (so far); the shot suggests that De Leon has a streak of cruelty in him as well (you also see it in the relentless nature of his darker films), a streak mitigated by the artist in him demanding that subtlety and modulation be imposed on that relentlessness.

If Dadong has a rival, it’s Mila. Mila is arguably Dadong’s feminine equivalent, his creation of course but also his equal in courage if not physical strength. Only Mila dares openly defy Dadong; only Mila actually attempts escape. And only Mila displays some of Dadong’s other qualities — when Noel complains of the house rules, Mila cuts him off like her father does, though with more diplomacy; when Mila wants something she works on Noel like the manipulator her father is, though less obvious (unspoken: that the marriage itself is a probable sham urged on Noel by Mila, arguably her most elaborate escape attempt). Mila as a victim of Dadong’s repression is forced to be inventive in her attempts to defy him; she also possesses an empathy Dadong can never understand. Mila, if you like, is an improvement on Dadong, the hope for a better world he refuses to subscribe to, or believe in, or love.

“Kisapmata” translates to “blink,” as in blink of an eye; a swift sudden gesture, and I think key to what the film is saying to us: that De Leon’s is a dark forbidding world, full of secrets and ugly unspoken truths, and that the divide separating his world from our own is as brief and delicate as the blink of an eye. Easily Mike de Leon’s masterpiece and in my book one of the greatest of Filipino films.