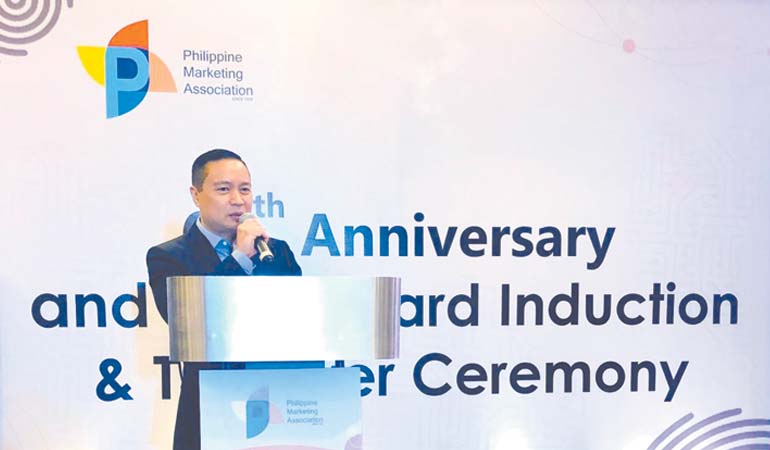 With his impressive style of leadership and strong passion for work, it comes as no surprise when PhilStar Media Group Executive Vice-President Lucien C. Dy Tioco earns a top seat in a reputable organization or gets recognized by a prestigious award-giving body. Most recently, he added another achievement under his name as he becomes the newest president of the Philippine Marketing Association (PMA), the country’s elite group of marketing leaders.

Mr. Dy Tioco and the rest of the 2020 PMA Board of Officers and Directors were inducted by Senator Mary Grace L. Poe last Jan. 29. During his inaugural speech, Mr. Dy Tioco shared his plans for the 66-year-old organization and identified specific actions on how to attain these. From the way he presented his vision for PMA, one can already realize the burning passion driving Mr. Dy Tioco in all his endeavors.

Despite some expected hurdles along the way, Mr. Dy Tioco’s courage to lead a community of globally competent Filipino professional marketers in an era of unprecedented change remains firm. With him now sitting at the helm of the PMA, an exciting, great year awaits not only for the organization but also for the entire local marketing industry.

A TRAILBLAZER IN HIS FIELD

Before becoming the visionary marketer and communicator that he is known today, Mr. Dy Tioco also started from the bottom. His journey to success, as he said, was not merely a matter of luck, but a product of hard work and persistence.

After finishing his Bachelor’s degree in Journalism at the University of Santo Tomas (UST) in 1985, Mr. Dy Tioco worked as an artist and repertoire at OctoArts International where he was responsible for screening all international releases of different music genres from globally renowned record labels like Virgin, Chrysalis and RCA, while ensuring they fare well in the local market.

Following a short stint at a different newspaper company, he then joined The Philippine Star in 1987 as a branch coordinator for the classified ads section. He later moved to the company’s marketing research unit, and became an account manager handling advertising sales where he made his mark as one of the company’s top sales performers.

Mr. Dy Tioco steadily rose through the ranks and was appointed as advertising manager in 1997 and became the advertising director three years later. In 2012, he was further promoted as the senior vice-president for sales and marketing of The Philippine Star, and was tasked to hold the same position at the country’s top business daily BusinessWorld in 2015 after it was added to the roster of titles under the Philstar Media Group. In 2016, Mr. Dy Tioco was appointed as the executive vice-president for sales and marketing of both The Philippine Star and BusinessWorld.

Under Mr. Dy Tioco’s direction, The Philippine Star over the years has cemented its position in the industry despite the massive changes brought by digitization. From a post-EDSA Revolution newspaper, he had maneuvered The Philippine Star’s transformation into a newspaper-based multimedia organization, crossing the borders of digital, mobile, television, and billboard.

The company embraced a fresh mantra by adopting a more modern and multifaceted approach to reach its readers. It has introduced its own brand of mobile and social media platforms, as well as an augmented reality app called “LiveIt!” with huge success.

The Philippine Star also expanded into television with PhilstarTV, which helped the brand strengthen its influence in the lifestyle space. It also broke ground as the first paper to venture into the teleserye genre with the Single/Single, which brought huge revenues and recognitions for the company. Single/Single movie becomes the first foray of Philstar Media Group into movie-making.

A year since his appointment in BusinessWorld, Mr. Dy Tioco helped the country’s premier daily earn more revenues through leading the company in conducting high-impact on-ground events. These serve as great avenues for industry and government leaders to converse on key challenges and opportunities for the nation. Some of the most notable and profitable events that BusinessWorld had successfully organized were the annual BusinessWorld Economic Forum, the BusinessWorld ASEAN Regional Forum, and the BusinessWorld Industry 4.0 Summit.

Mr. Dy Tioco’s groundbreaking initiatives have helped him earn some accolades and recognitions. In 2016, Mr. Dy Tioco received the Outstanding Achievement in Marketing Communications citation at the 37th Agora Awards for pushing the envelope for print media to thrive well in the changed media landscape. He was also named as one of the recipients of the 2016 CEO Excel Award from the International Association of Business Communicators (IABC), and was recognized by his alma mater, UST, as an Outstanding Thomasian Alumni (TOTAL) awardee in the field of media.

Backed with his extensive knowledge in the field of marketing and communication, together with a set of dependable management skills, Mr. Dy Tioco is indeed a best fit for leading a respected organization like the PMA in this crucial era of digitization. His thrusts for the organization alone will further attest to this.

“This 2020, these will be the thrusts of the PMA Board: pursue the redefinition of marketing by understanding the effects of the Fourth Industrial Revolution (IR4.0) to our industry; prepare to reformat our organization for us to be able to respond better to the impact of new technologies; and as we have been championing the MSMEs, let’s invite more members to be part of PMA, especially those who belong to the startup community whom we can learn on the brilliance of solution-driven ideation and for our organization to reach out to realize their potential and look forward to a bright economic future for our country,” Mr. Dy Tioco said.

These thrusts, he said, will be achieved by developing a culture of solution-based innovation within the PMA; repositioning the PMA as an organization that keeps redefining marketing; and making the association a community of growing businesses through effective marketing.

Mr. Dy Tioco also shared some of his “wish list” that will help the organization succeed in its plans this year. This includes bringing the National Marketing Conference (NMC) back to its prestige; expanding the Agora Awards; shifting content to innovation and new marketing journeys through NMCs, General Membership Meetings, and Public Relations; putting a premium on membership worthiness; generating a more aggressive approach in creating more revenue streams for PMA’s sustainability; establishing new education programs involving the new technologies to equip the youth; and seeking more collaboration with the different industry associations as he believes that industry stakeholders should all work as one.

With the big waves of changes and challenges that the marketing industry is currently facing and will encounter in the future, Mr. Dy Tioco believes that the roles of PMA leaders and members have never been more important.

“Together, let’s use our talents, geniuses, resources, and hearts to guarantee that the PMA will not just be able to keep afloat, but also surf above the waves, dive deep into the ocean to discover more hidden treasures, and swim back to the shore stronger, better, and more future-ready,” he said.