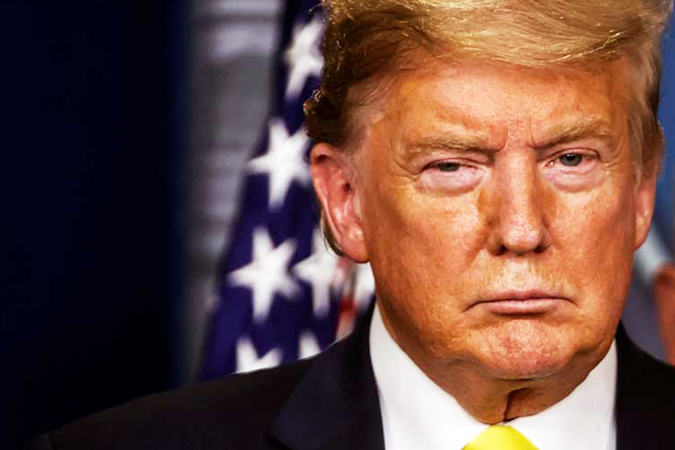 There’s a new epidemic being posted in social media. Moronavirus. The root word is “moron” as in idiot, stupid or nincompoop. A more charitable synonym is “incompetent.”

An indication of moronavirus is the assertion by President Donald Trump that people could go to work in spite of showing symptoms of coronavirus or of being actually infected.

Said Trump: “So if, you know, we have thousands or hundreds of thousands of people that get better just by, you know, sitting around and even going to work… some of them go to work, but they get better.”

In a telephone interview with Fox News talk show host, Sean Hannity, Trump also said he doubted the coronavirus death rate of 3.4% estimated by the World Health Organization (WHO), calling it “a really false number.”

Trump gave no logical or coherent explanation for his doubts except to say that he based his comment on a “hunch” (in other words, guesswork), as well as on “conversations with a lot of people” — a usual Trump tactic of attributing his own weird views to unspecified sources. He is usually his own source, although his other sources of misinformation are folks like Sean Hannity and others at Fox News.

Trump’s remarks are not only moronic but dangerous. If his supporters take him seriously (as they apparently do), that could exponentially aggravate the health crisis in America. Medical professionals have protested what Trump said. Said Dr. Kathie Allen, a California family physician: “Am a doctor. Don’t go to work with coronavirus. Don’t listen to Stupid.”

It’s obvious whom she meant.

Contradicting Trump, the Centers for Disease Control and Prevention (CDC) urged people to stay at home if they are sick. However, the moronavirus appears to have also infected even the CDC. The executive director of a national organization of US nurses reported on network TV the complaint of a nurse who had contracted coronavirus after attending to afflicted patients. Her superiors recommended testing. State health authorities endorsed this. But the CDC disapproved the test ostensibly because if the nurse had been wearing protective gear, she should not have been infected.

But the fact was that the nurse had already been infected! One wonders if moronavirus is as dangerous as coronavirus.

That’s not all. Pressed to conduct widespread nationwide testing of citizens for the virus, the White House claimed that the Trump administration has arranged for one million tests to be conducted “within a few days.” Sensible quarters, including members of Congress, don’t believe this is possible.

“I’m hearing from people who are sick, who want to get tested, and don’t know where to go,” said Senator Patty Murray of Washington. Her state has been one of the hardest hit by the virus in the US.

It appears, however, that the Trump White House is not the only presidential quarters afflicted by the moronavirus. Malacañang seems to be similarly afflicted. According to Manila media, “the government has faced intense criticism over its handling of the outbreak, and its decision to allow direct flights from China despite the lockdown in Hubei province, the epicenter of the epidemic.”

Warnings have been given by members of Congress about thousands of Chinese workers entering the Philippines and about millions in funds being laundered by China in the country. Estimates are as high as 500,000 Chinese workers, many of them suspected to be members of the Chinese military (this makes you wonder what China’s game plan is).

But President Rodrigo Duterte does not seem bothered by these red flags.

The Duterte government has either no idea or won’t reveal how many Chinese nationals are working in the Philippines. The Senate committee on Labor, Employment and Human Resources has expressed exasperation at the inability of the Bureau of Immigration (BI) and the Department of Labor and Employment (DoLE) to come up with credible figures on the number of Chinese nationals working “legally or illegally” in the country.

Senator Joel Villanueva, Senate committee chairman, reportedly lambasted the BI and DoLE: “It’s glaring. Your records show you are issuing few alien employment permits, but there’s a flood of Chinese workers, and from their numbers, it’s clear there are illegal workers.”

There is no proof that the senators actually made those bizarre suggestions. But Senator Frank Drilon was quoted in media, asking with unveiled sarcasm, whether the Philippines has become a province of China.

There has also been public outrage over a 44-year-old Chinese man from Wuhan and his female companion who had reportedly visited the provinces before being tested in Manila and being found positive for coronavirus. One of them subsequently died. Wuhan was where the coronavirus began to spread.

Is the Philippines prepared to cope with the epidemic? Opinions of the medical sector and knowledgeable officials are not reassuring. In a Senate hearing, the Department of Health (DoH) was asked about how it identifies and tracks down people who may have come in contact with the infected couple from Wuhan. No clear answer was given.

While the DoH claims that it is “prepared” to cope with the epidemic, that may simply be posturing or an attempt to prevent panic among the public. Privately, health professionals and hospital personnel have admitted that they are “ill-prepared,” due to the lack of transparency among health authorities, understaffing, and the shortage of protective medical equipment.

The dire state of the Philippine healthcare system has been made worse by health budget cuts of P2.25 billion announced by Duterte. This means limited funds for protective gear urgently needed by health workers.

At this point, we can only pray that Duterte will not listen to another one of Trump’s theories on coronavirus, namely, that it cannot survive in warm weather. Trump is said to have theorized that when the cold season in America is over and summer sets in, the virus will disappear.

Since it is always a hot season in the Philippines, does it mean the virus won’t spread in the country? If so, how come people have already been infected?

Rather than listen to those afflicted with moronavirus, let’s follow what clear-headed authorities have suggested to minimize the risk of being infected, until a vaccine can be made widely available:

Observe impeccable hygiene. Always wash your hands thoroughly with soap and warm water, as well as with a disinfectant, especially after coming from public places. Avoid touching your face and eyes before washing your hands. Use a tissue for coughing or sneezing and dispose of it properly. Stay home and work at home if you don’t feel well (don’t believe Stupid). And minimize exposure to big crowds.

Most of all, don’t panic and don’t spread panicky rumors. Life must go on.