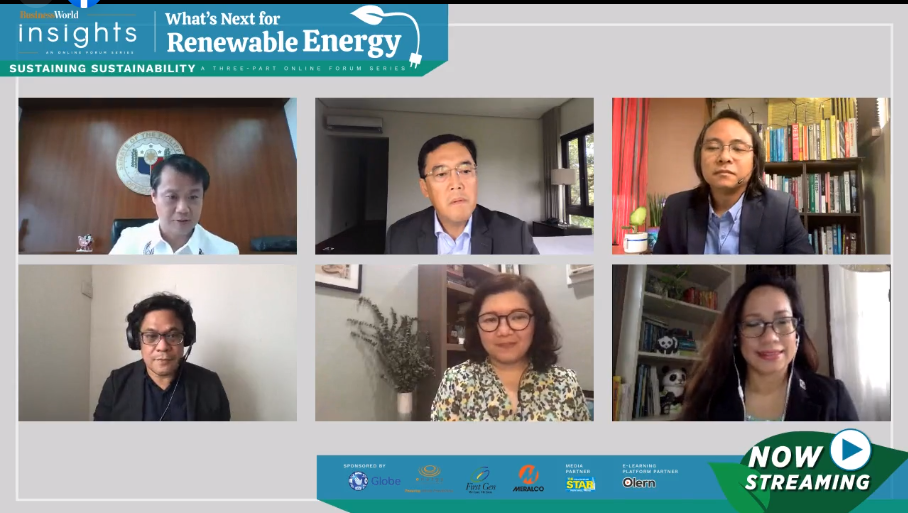 Addressing the global issues of sustainability involves the further adoption of renewable energy (RE). The shift to RE, which has gradually emerged in many countries including the Philippines, will help achieve mainly United Nations’ Sustainable Development Goals of affordable and clean energy and of climate action. Now, as the current pandemic accelerates several transitions, the call for a transition to renewables is likewise ringing louder.

Last Nov. 11, the panel in the final leg of BusinessWorld Insights Sustainability Series agreed that adopting RE is more crucial and necessary for the country as it moves forward from the present crisis. Each shared their perspectives on what are the next steps the government, the sectors, and other stakeholders should take for a successful shift to RE.

Atty. Monalisa C. Dimalanta, chair of National Renewable Energy Board (NREB), noted the changes she has observed in the renewable energy sector, saying that “the RE cheese has moved” in various ways.

NREB’s chair also observed that the ‘RE cheese’ has moved up in terms of technology deployment and efficiency. Specifically, the capacities of solar are now more than third of what they have started out over the last decade; while wind turbines can double their capacities at present.

The biggest chunk of the ‘RE cheese’, however, has “moved out of the box”, with the radical pervasive shift from conventional fuels and renewable among key funders such as funders, policy makers, and big businesses. “This is, in large part, affected by the reduction in cost, the increase in efficiencies, the movement in technologies,” Ms. Dimalanta said.

For the NREB chair, the next steps for RE in the Philippines involves updating the National Renewable Energy Program (NREP) for 2021 to 2040; giving customers the power to choose RE; integrating transition enablers into regulation; and ensuring effective implementation of Renewable Portfolio Standards for both on-grid and off-grid sectors.

“The big thing with this NREP is we have hard-coded our RE targets with the demand-supply projections. Our recommendation would be: ‘It’s not going to be an aspirational target anymore; it is going to be an imperative.’ We have the targets and we will work towards how we get to that target in the next 10 and 20 years,” Ms. Dimalanta shared about updating the NREP.

She also shared that the board is in the process of launching the Green Energy Option Program, which is seen to greatly benefit micro, small, and medium enterprises (MSMEs). “[W]e’ve done the numbers at NREB and we can see that there will be savings for MSMEs if they avail of this option,” Ms. Dimalanta noted. “We’re very fortunate that we have the support of both the DoE (Department of Energy) and DTI (Department of Trade and Industry) for this endeavor, and also of DoST (Department of Science and Technology) in enabling energy startups, because what will fuel RE will be innovation.”

With much work left to be done in the RE shift, the chair encourages stakeholders to actively contribute. “From a culture of compliance, thinking about ‘Is this going to get me in trouble if I do this or don’t?’, let’s move towards an environment of engagement, where everyone will really be involved and everyone is contributing to a vision that we all share.”

Richard B. Tantoco, president and chief operating officer of Energy Development Corporation (EDC), recognized that energy transition is given more attention globally, and this was driven by several factors.

One of these is the global recognition that human-based activities have contributed to the warming of the planet, which in turn has led to policy shifts and financial incentives for RE, such as tax rebates in US and the broad use of feed in tariffs in Europe.

The EDC executive also observed that the transition is driven by the vital shift in the governance and preference of large companies, as seen in reinsurance company Munich Re stopping insurance for coal plants and global technology powerhouse Siemens no longer participating in bids for coal-fired plants.

The same is also seen among banks, with the Institute for Energy Economics and Financial Analysis finding last year that 100 financial institutions — including 40 of the top global banks and 20 significant insurers — have divested from thermal coal. “Momentum is building. If no one’s going to finance, engineer, and manufacture equipment [for such sources], then the direction is quite clear,” Mr. Tantoco stressed.

What also makes the RE transition imminent and beneficial is the country’s richness in renewable resources. “From January to June, we get maximum sunshine. From July to January, we get maximum wind,” Mr. Tantoco observed, adding that the country also has capabilities in geothermal and biomass.

Furthermore, the EDC executive stressed that the country’s geothermal potential can be further maximized in the coming decades. However, he finds that science has not yet advanced to the point where it has cracked what he calls “the holy grail of geothermal.”

“All the technology we have today can tell whether there are geothermal fluids from the ground… but one thing we cannot tell: After we drill, will the earth be permeable?” he asked. “Will there be pores on the ground that will allow the fluid to flow freely and up out of the earth and into the infrastructure?”

Until that ‘holy grail’ is found and cracked, Mr. Tantoco continued, geothermal energy will need much government support, either by absorbing the risk of the first few wells or compelling the national grid to build the transmission line.

First, he finds that there is a socioeconomic development imperative that presents an opportunity to devise a program that pair economic recovery with transforming the energy system. “Investment in renewables impacts job creation and other baseline indicators positively, as well as the transformation of energy systems,” Mr. Saño said.

There is also a climate imperative that inevitably pushes for reallocating capital toward low-carbon technologies; and an ethical imperative emerges as well, with climate change partly attributable to the burning of fossil fuel.

“[There’s a] clout of doubt regarding the practices… across the supply chain of fossil-based power generation, [as well as regarding] the social and environmental toll of continued extraction and utilization of oil and coal gas,” Mr. Sano stressed, “The ethical question is clear. And the answers are, without doubt, in front of us.”

Lastly, there is a common sense imperative that shows that RE is the logical, reasonable, and sensible choice, with the movement towards clean energy apparent among institutions, industries, and governments.

“Confronting the climate crisis, as well as the coronavirus crisis, by abandoning dirty energy and the old normal does not mean stepping on the brake pedals of our economic development. It is about taking a path, but one that leads to a sustainable future,” the Greenpeace director added.

For Atty. Angela C. Ibay, Climate and Energy Programme head of World Wildlife Fund (WWF) Philippines, energy resources are involved in enabling an “equitable and just transition” that limits global warming, protects people and nature, and builds a climate-resilient future — a goal that WWF aims to reach by 2030.

The shift RE, she continued, will be possible if stakeholders work together by supporting research and development, upscaling innovative projects, integrating RE appreciation with conservation, and implementing efficiency measures.

“Renewable energy, while it is a resource that is very much indigenous, [should be integrated] into how our nature is moving,” Ms. Ibay stressed. “[In our] ‘Living Planet’ report, we’ve seen that in the last 15 years, the decline in our biodiversity has really sharpened — as much as 68% — and we don’t want that to be… further decreased, even as we’re seeking renewable energy resources that we would tap in the near future.”

Furthermore, the WWF executive emphasized that access to clean energy should be ensured for everyone. “For our country, which is archipelagic in nature, we know that many of our countrymen do not enjoy the benefits of electrification,” Ms. Ibay noted. “Even the DoE said that based on their data in December 2019, there are still 1.6 million households which are unserved in terms of electricity. That amounts to 92% of all households in the country. That’s really big and staggering”.

The pandemic has realized several unimaginable things for the energy sector, which now serves as signals to further accelerate RE transition, Senator Sherwin T. Gatchalian shared during the panel.

Mr. Gatchalian first shared that global oil prices have gone down below zero, showing that big oil prices or firms are not always beautiful under extreme stress, especially during the pandemic.

The senator also noticed that big oil firms, such as Shell, BP, and ExxonMobil, are moving to RE. For him, this weakens the notion that big oil companies will continue to grow as they invest in oil fields and oil-related exploration activities.

On the local end, a sudden drop in demand was observed during the lockdown, when many stayed at home and establishments either closed or reduced operating capacity. For Mr. Gatchalian, this was contrary to the perception that the country’s electricity demand will always grow.

“Because of this drop, a lot of cracks were exposed in the operations of our fossil fuel plants,” he said. “The exposure here is that such plants have difficulty operating under a very stressful environment such as very volatile demand.”

Pricing was also quite volatile and below the marginal cost of selling electricity, causing coal-fired plants to sell at a loss, the senator continued. With prices in solar and onshore wind found to be dropping quite rapidly, Mr. Gatchalian finds RE more competitive than putting up new coal-fired plants. “It’s more expensive to put new coal compared to existing utility-scale solar power plants and also wind. This is actually the primary reason why a lot of the big oil companies are transitioning to new energy,” he said.

Mr. Gatchalian also noted the recent pronouncement of the DoE on the moratorium on new coal-fired plants, regarding it as “a wake-up call that the system is changing and the systems should change in the future”.

Aside from these signals favoring the RE transition, the senator sees great potential from the various forms of RE available in the country. He cited data from the DoE indicating that the potential capacity of various RE sources, primarily from hydro and solar, amounting to 31,000 MW. “This 31,000 is enough to power our economy for the next 10 years. This is a potential we should harness, because instead of importing diesel or coal, we could just harness 31,000 megawatts of renewable energy.”

To harness this potential, Mr. Gatchalian stressed, policy reforms and legislation are necessary. Among such legislation, the Energy Virtual One-Stop Shop Act and the Energy Efficiency and Conservation Act are already passed. Both were advocated by the senator. Senate Bills on electric vehicles and charging stations, microgrid systems, and midstream natural gas industry development are continuously being discussed.