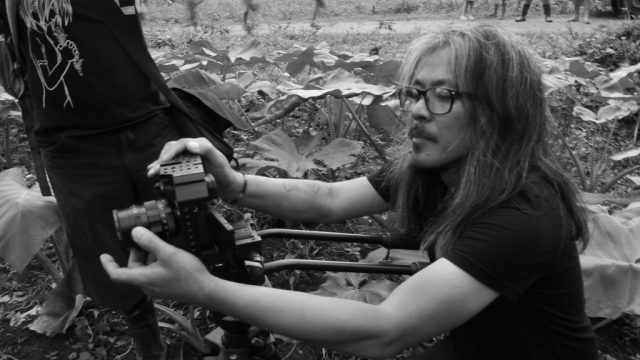 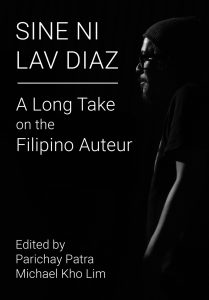 While finishing their doctorate studies in Melbourne in 2017, film scholars and now professors Parichay Patra and Michael Kho Lim had the idea of publishing a book on Filipino filmmaker Lav Diaz and his works while studying film and watching Mr. Diaz’s films at film festivals.

The result was Sine ni Lav Diaz: A Long Take on the Filipino Auteur which details the life and works of the celebrated Filipino filmmaker.

Mr. Diaz, whose signature style involves very long, often static, shots, is perhaps best known to the public for the length of his movies which include Norte, Hangganan ng Kasaysayan (2013, Norte, The End of History), Ang Babaeng Humayo (2016, The Woman Who Left), Ang Panahon ng Halimaw (2018, Season of the Devil), the eight-hour long Hele sa Hiwagang Hapis  (2016, A Lullaby to the Sorrowful Mystery), and the nine-hour long Ebolusyon ng Isang Pamilyang Pilipino (2004).

The book cover features a black and white photo of the director on the set of Ang Hupa (The Halt), taken by Cielo Bagabaldo.

With the publication of the book, the authors intend to expand the discourse of Mr. Diaz’s works in cinema studies.

“We want to situate Lav Diaz in different context and domains. That is why we have engaged a number of contributors from around the Philippines and from other parts of the world,” co-editor Mr. Lim said during an online press launch on Aug. 17 held via Zoom and livestreamed through Facebook.

The book takes a critical look at Diaz’s career and body of work from various perspectives, with contributions from cinema studies researchers, film critics, festival programmers, and artists from the Philippines and around the world.

“Our intention was to make the book more interesting, more comprehensive. So that many approaches many viewpoints can be introduced,” co-editor Mr. Patra said.

Mr. Patra added that the book includes essays on Lav Diaz’s connection with Russian novelist Fyodor Dostoevsky, how Mr. Diaz wanted to present in his cinematic style something different from “the commercial clutches of a specific format”; and his contributions to Philippine cinema.

An excerpt from the book’s Introduction reads: “The book’s title uses Diaz’s directorial credit — his signature or branding to a certain extent: Sine ni Lav Diaz, which can be translated as ‘a film by Lav Diaz’ or ‘the cinema of Lav Diaz.’ We take on the latter notion to refer to his body of works as a form of cinema in itself.

“Correspondingly, we use ‘long take’ to signify Diaz’s cinematic style and to represent the book’s extensive look or comprehensive study on Diaz. It presents an expansive or a wide range of views through the contributors’ (long) take on Diaz and his works.”

In a video shown during the launch, Mr. Diaz expressed his gratitude to both editors and contributors.

“Thank you to the various contributors for your critical thoughts that became part of this book. Because of you, more works other than mine are given the space for a wider discourse and conversation for the country and for the world,” Mr. Diaz said.